The word 'codices' (the plural of codex) has multiple definitions.  They are ancient manuscripts which give us insights into civilizations from long ago, lists of medicines, or in modern codices can be ccodes used to conceal a secret.

We find codicesall over the world. Some are very rare. For example, only four codices of pre-Columbian civilizations have escaped the burnings of the conquistadores. They could not be deciphered until very recently, and they provide valuable information about a civilization that had grown to a significant size before disappearing. In China, where writing first began, the invention of paper, the processes of replication and printing developed very early on.  The appearance of bound volumes dated back to the beginning of our era. Classical philosophy, science and medicine that were developed in ancient China and stored in codices are used in the present day, although many also disappeared at the systematic destruction of libraries, at the decree of the first great emperor, Qin Huang Di.

But what are the common features between all these codices? Their age, civilization, language and writing are different; but all are valuable evidence of lost knowledge of the ancients. A thread connecting the knowledge of the builders of pyramids (in Egypt or South America), the Great Wall of China, and who knows, of Atlantis. The great tradition which has been erased by modernity and yet is our root.

According to Random House, a codex is defined as:

A codex that allows us to discover, decipher and understand something profound is a priceless treasure. Anyone who is smart enough to know to decode and read one has access to unique knowledge.

Today modern codices include games, anagrams and riddles, like the riddles linked to from the right-hand menu.  If you wish to make something secret, it's more likely that you would encrypt it using computer code, rather than creating it as a beautiful document on paper or papyrus.  While it seems a shame that the art of the codex is used less, online games do provide a different sort of puzzle, where instead of decoding something on paper, you are instead faced with the challenge of building cities or creating amazing fantasy lands, often in an interactive way with other players.

You're more likely to find a paper version of a codex in the modern world in Escape Rooms, murder mysteries or Dungeons and Dragons role-playing games.  A cryptic crossword could also be said to be a form of a modern codex!

If you have to decipher a code, some common methods include:

The freemasons use the code shown below, where you take the shape of the grid (with or without the dot), so the shape  _l  becomes A for example. 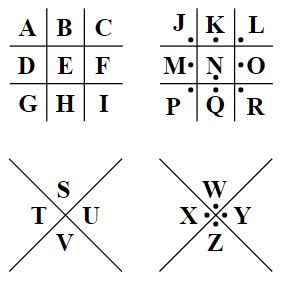 Can you decipher the following code?